(HARRISBURG) – Stressing that Governor Wolf’s extended lockdown of Pennsylvania is causing irreparable harm to families, schools, businesses, and communities, the Senate today voted to approve a measure that would end the statewide shutdown, according to Senator Ryan P. Aument (R-36).

House Resolution 836 would end the executive order Wolf used to shut down the state, which was issued on March 6 and renewed on June 3. The governor has used the emergency declaration to change and suspend state laws, spend state and federal taxpayer dollars without the approval of the General Assembly, and prevent shuttered businesses from reopening with new safety measures in place.

“The lack of transparency and collaboration from the Wolf Administration throughout this pandemic has resulted in a number of avoidable missteps and unintended consequences that have unfairly disadvantaged hardworking Pennsylvanians,” said Aument. “To add insult to injury, the Governor has repeatedly moved the goal posts in his reopening plan, which is a slap in the face to all of those who have been patiently waiting their turn, obeying the Governor’s innumerable orders, and risking everything to do so. Meanwhile, livelihoods are being crushed, businesses are shuttering, never to reopen again, and time is of the essence for many. Our constituents have been clear – reopen Pennsylvania.”

The resolution would allow companies in Pennsylvania to operate safely and consumers to use their services without the need for a business waiver, the process for which has been roundly criticized as being arbitrary and unfair.

Aument added that the state Constitution clearly states that the power to suspend laws belongs to the Legislature, not the governor, and cited overwhelming support for a safe reopening of Pennsylvania.

“The legislative process requires debate and consensus, whereas a unilateral approach by the executive suppresses the voice of the people, stifles debate, and sets aside the need for consensus and collaboration.  This leads to greater disunity and polarization during a time of crisis, when we least can afford it. We must not allow the unchecked emergency powers of the governor to stifle the voice of the people.”

Aument also discussed the need to reform the Governor’s powers in the future, explaining that he has introduced a bill along with colleague Senator John Yudichak that would limit the length of the emergency declaration to 30 days (from 90, as is allowed in current statute), with the option to extend the declaration with the approval of the General Assembly.

“Addressing today’s problems by passing House Resolution 836 is necessary, but we must also take steps to ensure that this unilateral abuse of power cannot happen again in future emergencies. We must ensure that no governor, Republican or Democrat, can ever again have this much unchecked power over the people of this Commonwealth, regardless of the circumstances.”

Senate Bill 1174 would also require the automatic creation of the Disaster and Recovery Task Force once an emergency is declared in Pennsylvania.  Under the bill, the Governor will also be required to notify the General Assembly of any actions his or her Administration intends to take during the declared emergency at least 12 hours prior to the issuance of such orders.

“The bottom line is this: The Governor is granted extraordinary power to declare and act under an emergency declaration as enumerated in Title 35,” said Aument. “The Governor is then granted the power to extend that extraordinary power in perpetuity.  So, the Legislature must have the ability to step in on behalf of the people, an option made clear in the intent of the language in Title 35.

“Senators and Representatives work for the people of this Commonwealth. We are not simply a rubber stamp for the whims of the executive branch. It is our duty to exercise due diligence and ensure a sound system of checks and balances, especially when the people of Pennsylvania demand it.” 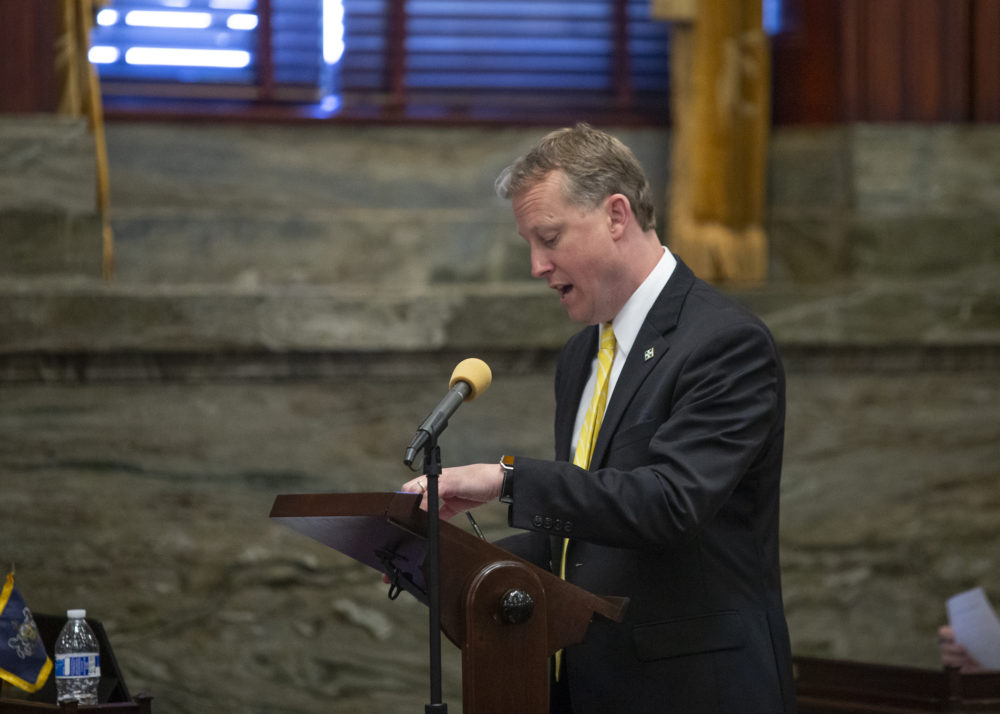 Senator Ryan P. Aument (R-36) speaks on the Senate floor in support of House Resolution 836, a proposal to terminate the Governor’s current emergency declaration in response to the COVID-19 pandemic.