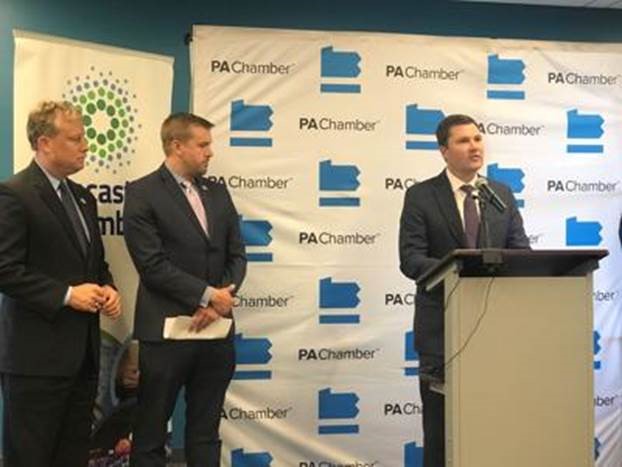 Luke Bernstein, president and CEO of the PA Chamber, speaks at a PA Chamber press conference Tuesday, Aug. 9, 2022, in Lancaster city to laud the recent passage of a measure to reduce the state’s corporate net income tax. Pictured with him are state Sen. Ryan Aument, left, and state House Rep. Bryan Cutler

Thanks to bipartisan collaboration in the state Capitol that produced landmark tax reform legislation in July, Pennsylvania is set to embark upon a new path.

For decades, the commonwealth has languished as our uncompetitive tax climate drove investments and opportunities to other states. Despite all of the state’s wonderful attributes — prime location, world-class educational institutions, diverse geography, natural resources and strong work ethic — an unfavorable tax climate has held us back from reaching our full economic potential. But there is change on the horizon, thanks to a strong collaboration between the private sector and lawmakers from both sides of the aisle to address Pennsylvania’s competitiveness and put the state on a positive trajectory.

Pennsylvania’s employer tax laws are set to undergo a major overhaul. This monumental tax reform package — which was enacted as part of the 2022-23 state budget agreement — takes a holistic, global approach to improving the state’s tax structure. With overarching goals of simplifying the tax code and making Pennsylvania more competitive with other states, there are elements that will benefit businesses of all sizes and increase opportunities for working families in the state.

One major component of the newly implemented tax reform addresses the state’s corporate net income tax rate, which at 9.99% is the second-highest rate in the country, behind only New Jersey, and serves as a barrier to growth. The tax reform package cuts the rate in half over the course of nine years — starting with a 10% reduction in 2023 to 8.99, with a 50% reduction to 4.99 by 2031. Based on current state corporate tax rates, once the law is fully implemented, Pennsylvania will go from imposing one of the highest corporate net income tax rates to having one of the 10 lowest in the country.

The benefits of that reduction go far beyond just improving the state’s business climate. Studies have shown that a decrease in the corporate tax rate leads to higher wages, increased home values, elevated gross domestic product and the creation of family-sustaining jobs. This long-needed reduction — which is the first change in the rate since 1995 — will give Pennsylvania’s economy a vigorous boost as we recover from this pandemic. For far too long, young professionals have left the state in search of better opportunities — often to states with policies more favorable to business formation and expansion. These professionals then start a family and invest in their communities, while their hometowns here languish. Pennsylvania now has a chance to reverse this trend by increasing economic activity in the state and affording graduates the chance to stay home or move back.

Small businesses in the commonwealth will also benefit from the tax reform package. Pennsylvania’s small businesses will now have the opportunity to defer state personal income tax liabilities through “like-kind exchanges” in which property is exchanged for similar property. That will provide employers with more resources to reinvest back in their businesses, stay competitive and create jobs. Previously, Pennsylvania was the only state in the country that did not offer this type of deferral.

An additional measure makes it easier for small business owners to buy equipment and invest into their businesses by allowing them to deduct the full purchase price of qualifying equipment, consistent with federal law. These changes will bring Pennsylvania in line with other states and federal tax law, and will level the playing field for entrepreneurs looking to start a business here.

The tax reform package was enacted at a critical juncture for our commonwealth, as economic headwinds forecast a challenging time ahead with continued rising interest rates, inflation and the potential for a recession. These reforms will provide relief for job creators, allowing for greater investment back into their businesses, employees and communities.

Tax reform isn’t a Republican or Democratic issue. It’s not even just a business issue. It’s a Pennsylvania issue. The competitiveness — or lack thereof — of a state’s tax climate has major ripple effects, impacting jobs, wages and opportunities within our local communities. And by working to improve the commonwealth’s overall competitiveness, we are working to build a stronger future for all Pennsylvanians — a future that embraces opportunity and growth.

The 2022 tax reform package is the first step in achieving this future. It is an example of the positive change that can happen when we work together for Pennsylvania. By putting partisan differences aside and encouraging cooperation between the private and public sectors, we are showing the world that Pennsylvania is open for business. It’s time to write a new chapter in Pennsylvania’s story.

Working together we can do just that.